What is a PD&E Study?

A Project Development and Environment (PD&E) Study is conducted to meet the requirements of the National Environmental Policy Act. During the study, we determine the location and conceptual design of feasible build alternatives for roadway improvements and their social, economic and environmental effects. A No-Build Alternative, which considers leaving the roadways in their present state with routine maintenance, remains a viable alternative throughout the study. A PD&E study is finalized when the Federal Highway Administration (FHWA), reviews the documentation and recommendations then provides a Location and Design Concept Acceptance (LDCA).

A PD&E Study is required even if federal funds are not used. The Study would need to meet state requirements which are similar to federal requirement in analyzing the effects of the proposed improvements. The state equivalent document is called a State Environmental Impact Report (SEIR) or a Non-Major State Action (NMSA) and the document is signed by the FDOT District Secretary/ Delegated Authority or designee. The FHWA would not be involved in this process.

If the study results in a Build Alternative selection, the project may proceed to the next phase, which is the Design Phase. 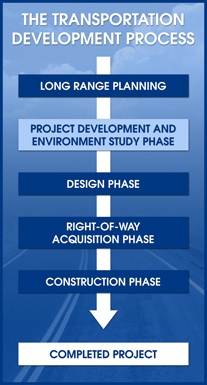 If the study results in a “Build” alternative being selected, the project may proceed to the next phase, which is the Project Design phase.

The US 41 / SR 54 project is currently in the Project Development & Environment (PD&E) study phase of the FDOT’s 5-step highway development process.