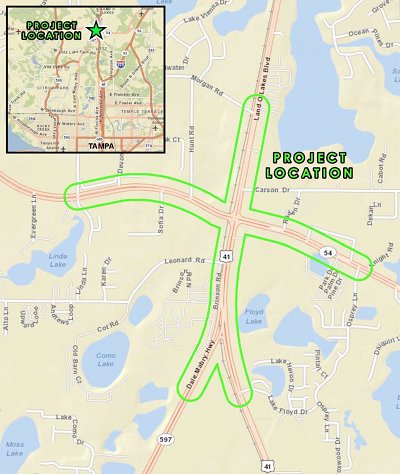 The Florida Department of Transportation (FDOT) is conducting a Project Development & Environment (PD&E) study for proposed improvements to the intersection at US 41 (SR 45) and SR 54 in Pasco County. The project study area will include areas adjacent to the intersection along US 41 and SR 54.

SR 54 is one of two existing major east-west arterials connecting eastern Pasco County to western Pasco County. SR 54 across Pasco County provides connections to several regional north-south routes including US 19, Suncoast Parkway, US 41, I-75, US 301 and US 98. The proposed improvements at the intersection of US 41 and SR 54 will enhance the overall transportation network linking Pasco County with the Tampa Bay region.

The need for this project has been established based on future traffic demands, future population and employment growth in the area. SR 54 is a primary evacuation route. Improvements at the US 41 / SR 54 intersection are included in the Pasco County Metropolitan Planning Organization (MPO) 2035 Cost Affordable Long Range Transportation Plan (LRTP), as well as the 2035 Regional LRTP Needs Assessment, which was developed by the West Central Florida MPO’s Chairs Coordinating Committee (CCC).

The purpose of this study is to identify and evaluate various alternatives for the US 41 / SR 54 intersection which will improve the flow of people and goods through the project area by increasing roadway capacity and reducing traffic congestion. The study will compare the effects each alternative may have on the environment and the surrounding communities, as well as the traveling public.

The US 41 / SR 54 project is currently in the Project Development & Environment (PD&E) study phase of the FDOT’s 5-step highway development process.